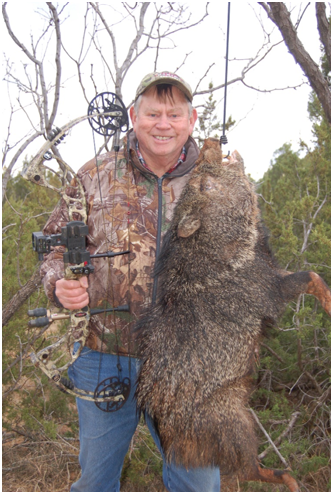 Javelina are members of the peccary family and are a very sporting game animal to hunt especially with a bow.  There are only 4 states in the United States that have javelina’s and Ranger Creek Ranch holds a good population of them on the Western portion of the ranch.

Javelina travel in small herds and seem to have a somewhat limited home range. They feed primarily on prickly pear which provides up to half of their diet along with mesquite beans, fruits, and insects.

They have poor eyesight and will often remain around humans longer than other wildlife when startled which makes bow hunting so attractive.  When cornered, they can defend themselves very effectively with sharp canine teeth.  They cannot stand the cold winters, but we have many crooks and crannies on our ranch where they can find warmth to withstand.

In Knox County, javelina are classified as a game animal and may be legally harvested with a hunting license from the first of October – last weekend in February and are limited to 2 per hunter per season.

Javelina’s have a musk glad on their rump which gives them their characteristic smell and keeps them in contact with their herd.  They usually weigh from 30-55 pounds and make great European, shoulder, and full body mounts.